A Brazilian Jiu Jitsu blog about everything.

I didn't get into Brazilian Jiu Jitsu because of the UFC.

Though watching Royce Gracie do painful looking things to muscle bound creatures was fascinating, it never made me want to learn how to do it.  If I were to be honest, it was simply because the violence wasn't beautiful enough.

Dial the years back a little further to pre-UFC, and you'll find tiny, pre-teen me cutting my  teeth on Sho Kosugi, the Teenage Mutant Ninja Turtles and a healthy imagination.  I liked my violence well choreographed and beautiful to watch (a combination that truthfully didn't seem to exist in North American film until Yuen Wo Ping started doing EVERYTHING here post-"Matrix").

To be really honest I wasn't looking for BJJ at all.  What I was actually looking for was something flowy that would compliment my passion at the time, which was choreographing fights for theatre.  It also had to have class times in the afternoon, because I was doing shows at night.  A ground based style wasn't even on the radar.  I loved Wo Pings choreography (the Matrix and Iron Monkey), Brandon Lee's JKD/Wing Chun, and Jackie Chan's environmental inventiveness, flow and parkour violence.  The majority of the fight choreography that I did was swordwork, but I loved the hand-to-hand stuff, so I figured some Aikido, Wing Chun or JKD would be a perfect fit. Rolling around on the ground wouldn't have struck me as very exciting in a world of whirling swords and dramatic kills, even if it had been on the radar.

So all that to say, I started BJJ by accident.  In fact, I didn't even know what BJJ was, but it fit my schedule and I really wanted to do SOMETHING.  Actually my first class, we kicked bags (there was an MMA focus at the school when I started) and heck, I was good at kicking; I had a karate background and my show kicks were one of my favourite things to choreograph.  Though to be fair, I didn't do much kicking of actual things, and as a result of my zeal in that first class, I almost puked and spent a good 20 minutes lying on the bathroom floor while class went on without me.  Romantic, I know.  It wasn't until the second class that I actually met BJJ officially and, as they say, the rest is history (and present, and future I suppose).

As a white belt in BJJ,  I was anything but graceful and flowing and certainly didn't bring to mind the incredible Violent Ballet of the Martial Arts that I had grown up loving.  But, unexpectedly, I found myself discovering something incredibly practical and realistic and it completely shifted my idea of what I wanted out of a Martial Art.  So a question emerged: does one have to choose between beautiful, flowing movement and brutal efficiency?  Surely there was no middle road.  Was there?

Now let's fast forward past countless hours of training, learning, reading, studying, teaching, pondering and talking my wife's ear off.  What I have been discovering as my Jiu Jitsu develops, is that all the "chi" work and ninja powers that the Eastern masters talk endlessly about (but never seem to demonstrate convincingly in a realistic setting) may actually have some grounding in reality.  Perhaps what it is lacking is a practical delivery system or sparring method.  Afterall, Jigaro Kano didn't revolutionize Judo with new techniques; he did it by adding live sparring to their daily practice and removing the emphasis on kata or empty forms.

I'm not talking about Michelle Yeoh and Zhang Zhiyi flying across rooftops,  and I'm not talking about the Dim Mak death touch or the "I can't spar with you, because I might kill you" warning (isn't self control an indication of Mastery??).  What I am talking about is being a 160lb skinny dude (Me) that can overcome skilled opponents greater in size and strength (as a general rule EVERYONE is stronger than I am) and make it look easy.  There is something mysterious and mystical about sweeping someone head over heels, when in their mind they felt so strongly connected to the ground moments before.  However, the mystery evaporates once you begin to understand the Bio-mechanics and complex interplay of movement and timing going on behind the scenes.  I'm not interested in something undefinable, like Chi-Magic.  Rather, I want to know why a 7th degree Red and Black belt feels SO DAMN HEAVY just sitting in mount.  Or why I couldn't move Cobrinha's knee even an inch in his open guard.  In my opinion, the answer lies in something concrete and discoverable, not something elusive and only available through the proper guru.

The more Jiu Jitsu I do, and the more I learn, the more I want my Jiu Jitsu to be effortless.  I don't want the people I roll with to feel like I beat them; I want them to feel clumsy, like they kept making mistakes and falling over.  I'm not even sure I want them to know I'm causing those mistakes.  I don't want to overcome people with my speed, flexibility or strength (haha); I want my structure and movement to cause my opponents structure and movement to feel wrong.   I don't even necessarily want it to be clear what happened.  When a 200lb brown belt tells me how strong I am, I know that it's not because I'm strong (I'm certainly not strong compared to a 200lb bruiser).   It's my Ninja powers, gaijin.  It's my Kung Fu, friend.  It's Bio-mechanics, baby.

What I've come to love about this art, is that the better I understand it, the more I feel like the purest version of BJJ (I don't necessarily think that the competition version is the "purest" version, for the record) is effortless, flowing and beautiful AS WELL AS brutally efficient.


It is of course incredibly violent, and while that might be the logical conclusion of an altercation,  it doesn't have be violent in it's delivery.

P.S.  For the record, Michaelangelo was always my favourite.  And I still (secretly) intend on becoming awesome with the nunchucks.  Also, my love of Michaelangelo in particular may have been an early indicator that as an adult I would be drawn to "Play" in Martial Arts practice, which I'll definitely be talking about in later postings. 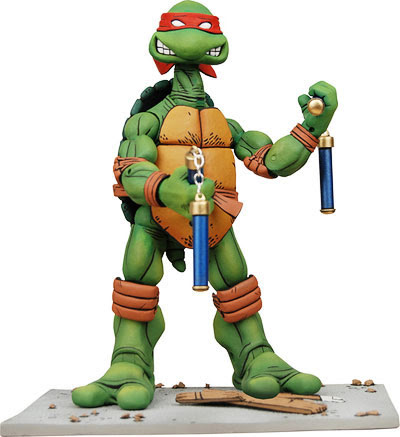 andrew
I'm a Brazilian Jiu Jitsu black belt under Mestre Sylvio Behring. My school is arashidowhyte.com. I enjoy flying down hills on a longboard, making music, and learning. Everything.